This turned out super sweet. Yeah, yeah, yeah...I know, it's a mountain bike with slicks, but no one would say word one if I fit knobby cross tires on my road bike. They'd simply say "cool!" But the most important thing is this is going to get ridden. Ken contacted me from Grand Rapids, MI and wanted me to build his bike after the frame was painted by Cyclart. I'm pretty damn honored to be involved in this project. I think the mixing of old and new on this bike turned out great.

What's old: The frame is a Tom Teesdale built Fisher Mt. Tam. It's fillet-brazed and Cyclart did a great job painting it. The color choice is perfect match to the parts. The other parts that are old are the old "no-logo" King headset, Gary Helfrich made Arctos polished titanium stem; and WTB ti bars. The Suntour roller-cam brake is also original to the bike. A WTB roller-cam would be the icing, but they are about as rare as hen's teeth. As it is, the Suntour brake set up really nice and I don't think anyone, including Charlie, would be able to tell it's not a WTB brake in a blind brake test.

It's going to be a shame to box it up and send it off to Grand Rapids (Velocity USA is in Grand Rapids) as it's such a neat bike. 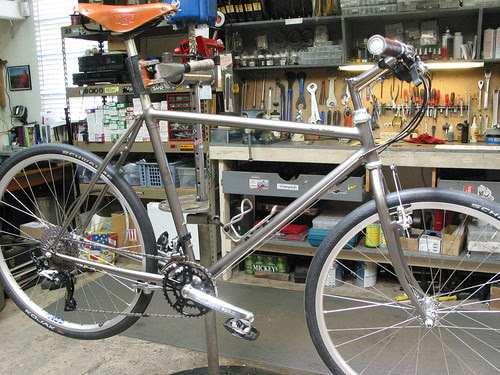 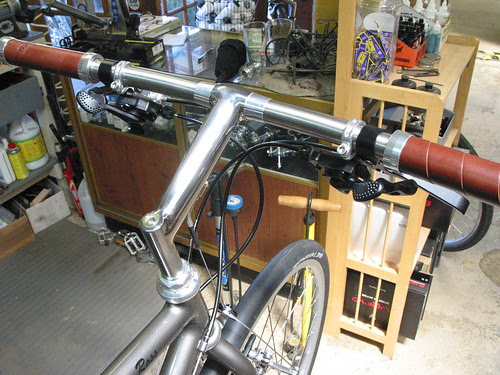 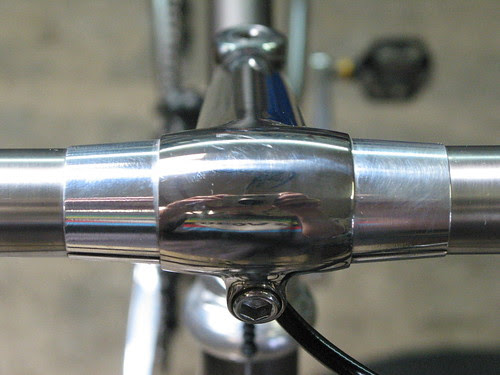 Attention to detail: orienting the Brooks logos left and right so they are readable. 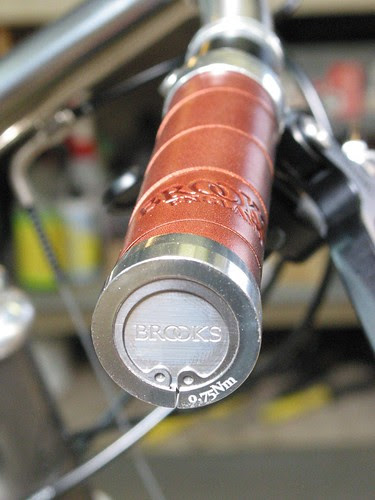 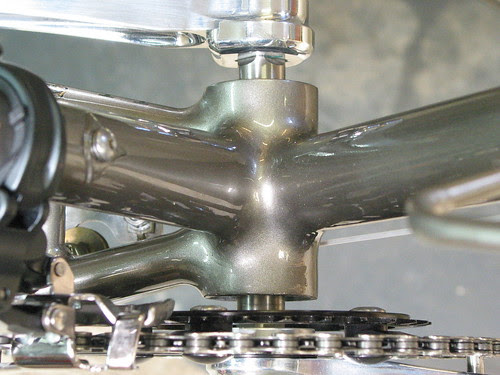 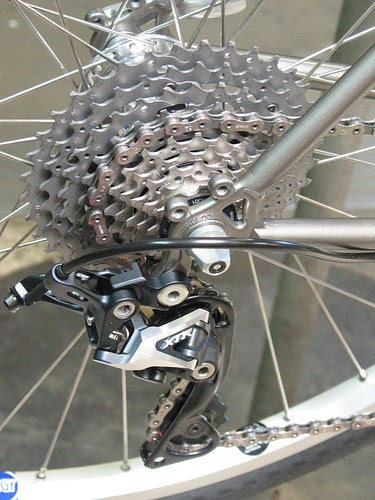 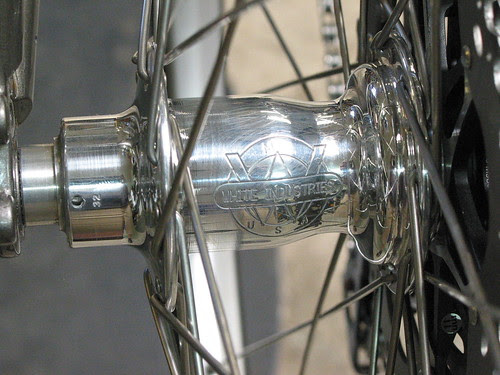 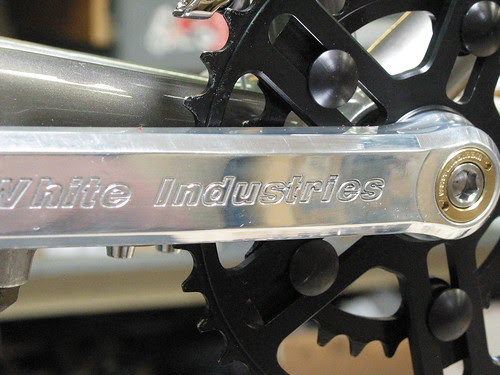 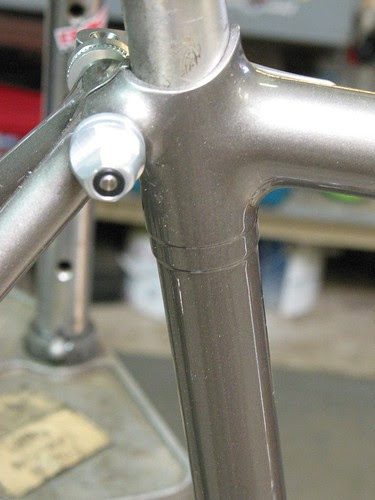 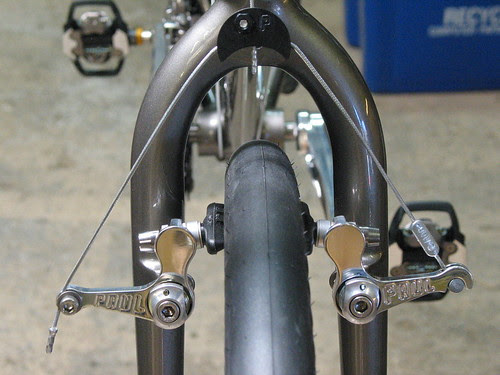 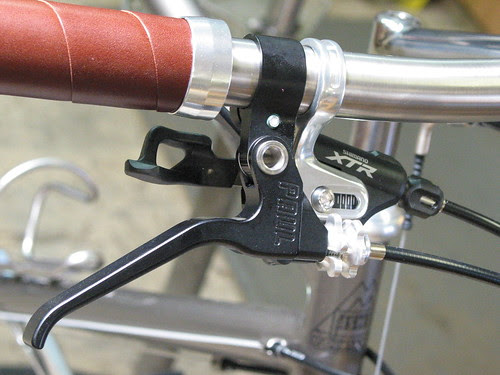 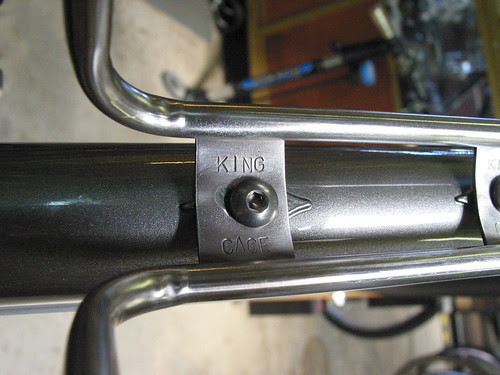 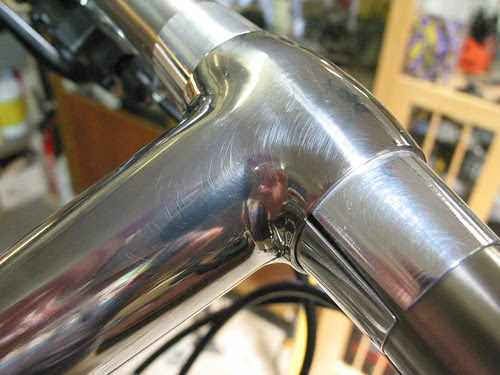 Email ThisBlogThis!Share to TwitterShare to FacebookShare to Pinterest
Labels: What's in the stand

How can you tell that is an Arctos stem? I have one exactly like it (down the the identical cable hanger detail) and always thought it was an Ibis.

Did Gary make any Ibis Ti stems for Scott back in the day?

From what I understand, Gary provided instruction to Ibis (Wes). The bar clamps Ibis used had the same shape. On the surface, an Ibis stem and Arctos would be quite similar. I know this one is an Arctos because the owner bought it new from Gary.

A bike like that is optimized for a certain kind of riding-- perhaps quickly and nimbly riding about town. This bike is not a compromise as some may see it, despite the intention of the original build. After over two decades of mtb's repurposed for alternative use, this is an outstanding example.

That's a really nice mix of old and new.

I have my old '91 Mongoose Alta set up just like this, albeit single speed.

I put on 1.6 Geax Street Runners and Tektro 520's and I call it my "Neighborhood Bike." I love it. It inspires slightly cocky riding and really makes you feel like a kid.

Of course, mine is the Trailer Park Version. This one here...well, as always, the stuff that comes through your shop Boggles the Mind, Black Mountain. Never stop. TJ

This is such an inspiring build. The mix of old and new is done so tastefully that it doesn't even matter that it's not all original. Do you happen to know if the frame was originally this color?

Thank you. I'm not sure of the original color. I saw it for the first time after Cyclart painted it.

How hard is it to find parts for the press fit square taper Bottom bracket? I've never seen one before... What did you use?